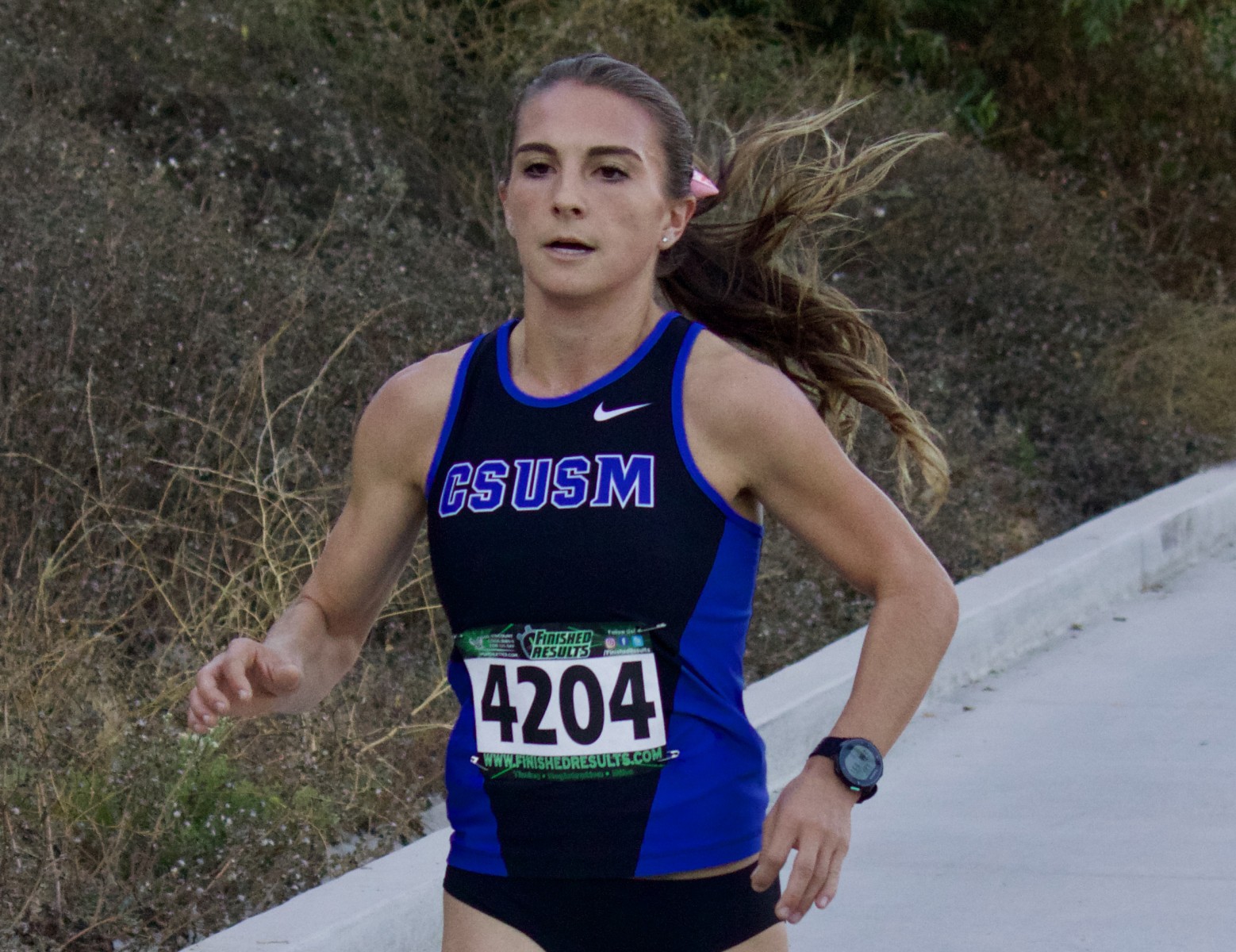 Lisa Flora is in the present, and that’s a sweet place.

But Flora also has a bright future in law enforcement. Along with her recent running times, it makes for some interesting conversations.

"Everyone tells me I can chase down the bad guys,'' Flora said.

Not a bad line -- and good luck turning your legs over faster than Flora, a CSUSM junior who graduated from nearby Escondido High School. Among Flora’s accomplishments during the season have been personal bests in the 6K (20 minutes, 55.3 seconds) and 5K (17:38.2).

"She is an amazing person and an amazing leader,'' CSUSM coach Steve Scott said. “She’s someone who’s going to be a major contributor in our society.”

Dig into Flora's background and it hasn't all been early finishes and post-race smiles. Her path to forming a potent 1-2 punch with teammate Natalie Rodriguez wasn't one big downhill trek.

After high school, Flora remained a Cougar – from the Escondido High Cougars to the CSUSM Cougars – but her knee started to growl. Instead of hitting the college campus at full speed, Flora had to put on the brakes. The pain in her lower knee meant couch time instead of fast times when she started at CSUSM.

That didn't sit well with the active Flora.

"It was probably one of the hardest things I ever had to go though,'' she said. “It was kind of my mind-set that I knew myself as a runner. And I kind of lost myself for a little bit and it took some time to find my groove. I was at a new school, with different classes.”

No different than her classroom work, Flora crushed her rehabilitation. Working with CSUSM trainer Michelle Hamilton, they rebuilt Flora’s knee and kicked away any doubts. A new-and-improved Flora was fit physically and mentally.

Her distances gradually increased, and it was accompanied by gratitude. The memories of those long days of not being able to run were never far.

“When I race, that's one of the things that I think about,'' Flora said. “Or if I'm going through a hard workout or having a hard time, I always think about being injured and it gets me through.”

While Flora’s knee injury may have caused doubt for some coaches, Scott wasn’t one of them.

"She took an enormous time off, but I knew she was a great athlete,'' Scott said. “Her progression has just been amazing as she is exponentially better every season.

“She is exceeding my expectations. She is blowing me away.”

Flora is studying criminal justice and was recently named again to the California Collegiate Athletic Association All-Academic list. She has participated in ride-alongs with the Escondido Police Department's Explorer program and she wants to become a detective.

“It’s not an easy job, it's a stressful one,'' Flora said. “But it's one where people thank you for the work that you do.”